Hi everyone! Today I´m going to tell you about the Ballestas islands. 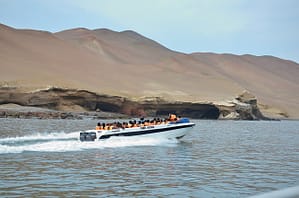 The Ballestas islands are located in Ica department, 250 kilometers south of Lima in the Guano Islands, Isles and Capes National Reserve System that was recently created to preserve the biological diversity from the ecosystems of the Humboldt Current’s cold sea.

This place is home to 18 bird species and 3 mammal species.

Because of its diversity this is a visit point that bird watchers from all over the world shouldn’t miss. Different fauna species stop in the islands to rest and eat during migration. It is also a key spot for marine fauna. 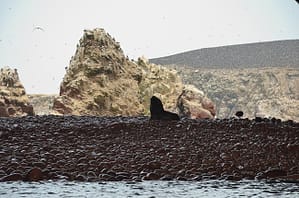 The Peruvian or Humboldt penguin (Spheniscus humboldti) is among the different species we can find in the Ballestas islands. Its population is decreasing every year due to the shortage of nesting places and food, human predation and at a larger scale due to the climate changes occurring worldwide.

The islands are also home to the Peruvian pelican, also known as alcatraz (Pelecanus thagus). This bird’s population has been affected because of the food shortage caused by the El Niño phenomenon.

modestus) that comes from Chile between spring and summer and the surf cinclodes (Cinclodes taczanowskii), that are from Peru, but can only be seen on the Ballestas islands occasionally.

Among the mammal species we can find a few marine otters or marine cats (Lontra felina). These are a kind of otter that can be found in larger amounts from Chimbote, in Ancash department to Tierra del Fuego in Chile and Argentina. We can find bottlenose dolphins (Tursiops truncatus) and a larger amount of South American sea lions (Otaria flavescens) as well.

We can also find crabs, starfish and sea spiders.

The excursion takes half a day and then you can visit the Paracas National Reserve. I’m telling you more about it on my next article.

To know about our tours clic HERE!

In this article I’m going to tell you about a little known and visited destination in Peru: The ... More