Discover with us some of the most beautiful churches in Peru, in which with a little imagination and knowledge about catholic history you will be able to decipher the evangelizing paintings on their walls.

The Andean Baroque route consists of the visit to 4 churches in Cusco: La Iglesia de la Compañía (Church of the Company of Jesus) the Canuncunca, the Huaro and the Andahuaylillas churches. These four churches are run by the Jesuit order in Peru that allocates its income for social work in the south of Cusco. 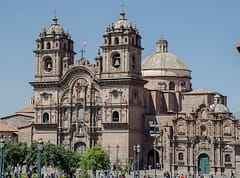 La Iglesia de la Compañía (Church of the Company of Jesus) is located in Cusco`s main square. The construction of this church started in 1576 over the Amaru Cancha’s Incan temple. The church was destroyed in 1650 by a strong earthquake and it was consequently rebuilt completely the same year. The church was built in stone in a Baroque style and has a cross-shaped layout. Its interior preserves one of the most impressive altars in Cusco, it is carved in wood and covered in gold leaf. The church is also a Cusco School’s sculpture and painting museum. 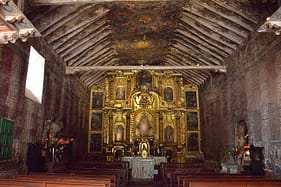 The Virgen Purificada de Canincunca church was built at the beginning of the 17th century over an ancient Wari center, located an hour by car (44.2 km) south of Cusco city. This chapel is next to the Urcos lagoon. Its internal walls and ceiling are decorated with beautiful paintings of flowers and angels that date from its construction. The carved wooden altar is covered in gold leaf and is decorated with Cusco School’s paintings.

The San Juan Bautista de Huaro church is a few minutes from the Canincunca church (1 km). Its construction dates from the end of the 16th century and the beginning of the 17th century. This Renaissance-style church stands out because of the impressive mural paintings on its interior that even cover the ceiling. The artist, Tadeo Escalante represents the last stages of the human life, death, final judgement, hell and glory. The main altar carved in wood and covered in gold leaf has a shrine covered in embossed silver.

And last, but not least, the San Pedro Apóstol de Andahuaylillas church which is known as the “Sistine Chapel of the Andes”. It is located 5 km from the Huaro church in the Andahuaylillas town. The construction of this temple started in 1610 at the initiative of the parish Juan Pérez de Bocanegra. Like the last two above-mentioned temples, this one has its walls and ceiling decorated with paintings of angels, flowers, saints and crests. The choir has two organs that are still working and are considered the oldest in Latin America.

The most beautiful aspect of this route is to know the social work carried out with the funds raised by this tour. I will give you more details about this tour on my next article.

What to visit in Cusco?

What to visit in Cusco? Cusco is the most visited city of Peru by foreign tourists. You are ... More

Inti Raymi The Inti Raymi or Sun Festival is one of the greatest festivities celebrated in ... More