6 things to do in and around Arequipa

Will you travel to Arequipa? If you said yes, congratulations! You will be amazed by its beauty. Its architecture based on volcanic stone, its canyons, cliffs, viewpoints and an impressive nature reserve make it a great choice for travelers. If you’re wondering what to do in Arequipa it is because you are looking forward to knowing one of the most beautiful places to see in Peru.

¡Here is a list of all things to do in and around Arequipa!

1. Visit the Monastery of Saint Catherine of Siena

History tells that this building remained as a monastery for women who took vows and it remained downcast until the 1970s. After that, it was opened to tourism, demonstrating a kind of historical, living, spiritual and cultural monument of the city and the region.

Although on the outside it looks like a sober building with hard ashlar walls, inside it is pure color. You will run through pristine courtyards, cloisters and beautiful streets with names of Spanish cities like Seville or Córdoba in which there is no shortage of flower pots. In addition, you will visit the kitchen, the laundry and some of the old cells.

This monastery can be visited every working day, but not religious holidays. The ticket costs 40 Peruvian soles. There are some discounts, but they are only for people born in Peru, and for foreign students.

You can also read: Arequipa: the white city’s anniversary

Almost 500 years after the foundation of Arequipa in 1540, Arequipa’s main square is still of paramount importance for Arequipeños, who usually meet here to chat along with some typical appetizers, some desserts that we encourage you to try.

The Basilica Cathedral of Arequipa, built in white ashlar, stands out in Arequipa’s main square. Although the original building was erected in the 17th century, it has been damaged by several earthquakes, among them the one of 2001. This caused one of the towers to collapse in its entirety although today we can see it completely restored, highlighting its neo-Renaissance façade with Gothic influences.

In addition to admiring it outside, we recommend visiting its interior. Admission is free and you can admire one of the largest organs in South America, of Belgian construction, a huge lamp of Seville origin, the neo-Gothic pulpit of French origin and Carrara (Italy) marble. Also, don’t miss the Cathedral Museum, ​​where fine pieces of goldwork are preserved, some more than 400 years old. 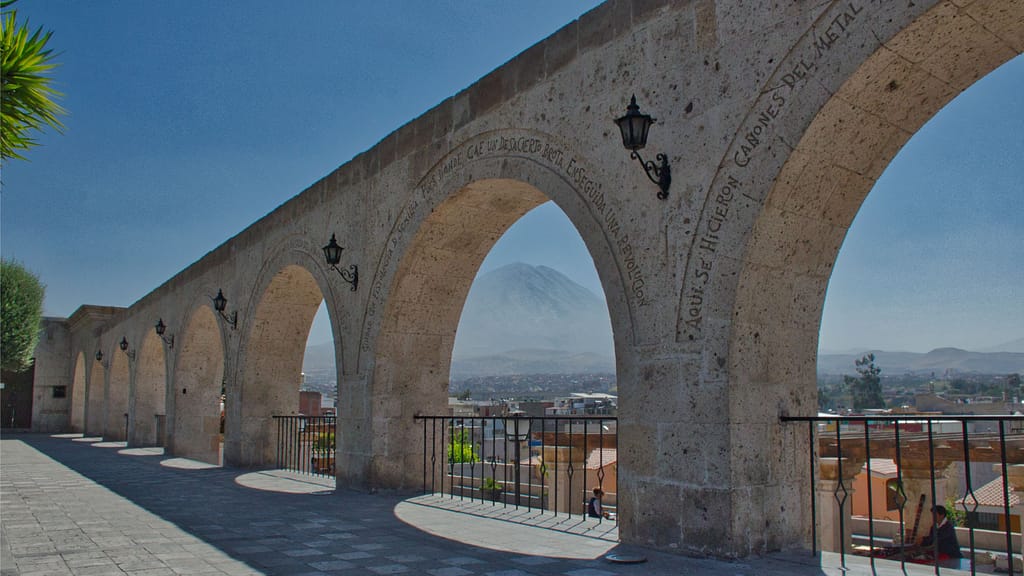 The historic center concentrates almost all the visits to do in Arequipa, but it’s worth moving a little to enjoy the environment of the city thanks to its viewpoints. In our opinion, the best is the Yanahuara viewpoint, to which you can walk from downtown in about 20 minutes or in one of the many official taxis you’ll find on the street.

This viewpoint has 9 spectacular arches made in the nineteenth century with the ashlar of the surroundings. In them we can see inscriptions of popular quotes from Arequipa and some thinkers, but what stands out most is the panorama of the Misti, Chachani and Pichu Pichu volcanoes. Located at 2.300 meters above sea level, on clear days you can appreciate their peaks and, of course, the whole city.

You can also read: Peru is an open destination to tourism

Pincanterías are an institution in Peru, but in Arequipa even more. In the 16th century they were known as “chicherías” because they served the “chicha de guiñapo”, a fermented drink with black corn. However, over time people began to prepare meals and they are the best place to taste the cuisine of Arequipa. In fact, they have been recognized as Cultural Heritage of the Nation.

You can only go during the day (they usually close at sunset) and from 12h to 15h the lunch is served. This consists of a menu of the day with a very strong soup, a second dish that varies according to the day of the week and chicha.

If lunches are over or you don’t fancy what they serve, you can also order something from the main menu, although prices are slightly higher. Among the best known dishes are the chupe of shrimps, the stuffed rocoto, the adobo arequipeño and, for dessert, the frozen cheese.

5. Visit the Campiña of Arequipa

The countryside is located on the outskirts of the historic center of Arequipa. In fact, it is not one, but several places that will allow you to admire the beauty of the spectacular Arequipa valley, and to know some emblematic destinations which are mandatory stops on your visit to the white city.

One of the most popular places to visit in the Campiña of Arequipa is Sabandía. Located nine kilometers from the city of Arequipa, this district is famous for its Sabandía mill. It was built in the 17th century at the request of the Spaniard García de Vargas Machuca, who commissioned its construction to the master builder Francisco Flores. It is a flour mill that looks more like a palace and can be visited.

But Sabandía also has other tourist attractions such as the Founder’s Mansion or House. This is a manor house belonging in its beginning to Garci Manuel de Carvajal, founder of Arequipa. Built in the 16th century, it is a typical Arequipa mansion with huge ashlar walls and spectacular vaults of the same material.

If you don’t have time to explore this area of Peru thoroughly, a must-do activity would be the Colca Valley tour. It’s located about 200 km from the city, so it’s best to choose a five-day tour, so you can explore the Ampato, Sabancaya, Hualca Hualca and Misti volcanoes, the Chilca mountain range, the Condor’s Cross viewpoint, Chivay and Choquetico viewpoint.

These were 6 places to visit in Arequipa. This city has a beautiful tourist attraction for everyone who wants to visit it, a relaxed atmosphere for travellers, cultural trade, with local Peruvian handicrafts, and world-renowned llama and alpaca wool clothing. We hope this information has been useful to you!

6 important tips for travelling to Peru

Will you travel to Peru soon? This wonderful destination is one of the most touristic countries ... More