Hi everyone! As I promised, I am telling you about experiencing a week in the Manú National Park in this article.

First of all, you must have the most important items for your trip in your luggage. Remember that since this is a national reserve there is a lot of services that are restricted in the park, there is no access to internet or mobile signal.

It is important to pack the following items:

The trip started in Cusco in the early morning. Our transport picked us up from the hotel around 5 a.m. and we headed northeast to Paucartambo town. 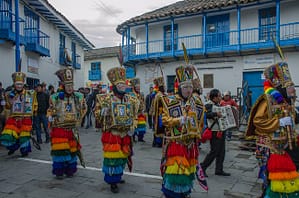 After knowing such beautiful town, we headed towards the Manú National Park again. 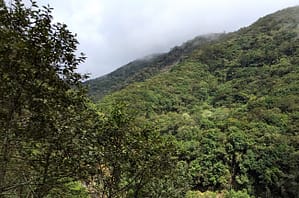 We arrived at the Acjanaco pass, which is the entrance to the park, after going uphill for two hours. There, we made a short stop to stretch our legs and use the restrooms if necessary. This is the highest point of the route (3,600 ma. s. l.) From this point, we started our way down entering the cloud forest.

The cloud forest has an area of more than 3,500 hectares that go from 3,000 m a. s. l.  to 1,300 m a. s. l. This is a very important area for humanity since it works as the park´s buffer and support area. The cloud forest works as a sponge, it takes water from the rain, condenses the clouds and then lets it out in the lower parts. This effect reduces the risk of flooding and landslides, lowering the sedimentation.

The cloud forest is the habitat of the spectacled bear, also known as Andean bear, South American bear, ucumari and jukumari (Tremarctos ornatus), which is currently an endangered species. Though we didn’t have the chance to see them, they wander the area looking for food. On our way, we had a short trek to have a closer view of the huge biodiversity of the area and admire it even more. While we were walking, a coati (Nasua) suddenly passed running just in front of us without giving us time to capture the moment with our cameras.

The forest is full of a lot of bird species like the Andean cock-of-the-rocks (Rupicola peruviana), which is the national bird of Peru. We could also see flora species such as orchids, bromeliads, ferns as well as different tree species.

After we had lunch on the route.

After 30 minutes sailing downstream, we got to the lodge. There, we had the afternoon free to have a stroll around the lodge and take a shower. After dinner, at 10, the lights are turned off and we rested with the rainforest’s whisper.

The group’s adventurers got up early to slide through the trees by zip line. It was amazing to go hanging through the rainforest with the adrenaline flowing in my veins. Here’s a video: VIDEO

After a couple of adventure hours, we went back to the lodge to have breakfast and to get on our boat to continue our trip.

We were surprised by the weather that day, we were caught by the friaje, so we had to take our sweaters from the bottom of our backpacks to wrap up. On our way downstream, we found some heron (Ardeidae) species, cormorants (Phalacrocorax) a black solitary eagle (Harpyhaliaetus solitarius) and American black vultures (Coragyps atratus).

We can usually see much more bird, mammal and reptile species, but because of the cold and cloudy weather the animals took shelter and didn´t let us see them.

We had lunch on the route on the boat. After 8 hours, we arrived at the Boca Manú town where we spent our second night. There, we found some other small bird and insect species. The rest of the afternoon we had free time to take a stroll and take some pictures. At night, we dine and once the lights were turned off we rest with the whisper of the night animals.

On our third day, we woke up very early to go to the park’s reserved zone. Waking up early comes with a prize, it is one of the most beautiful sunrises I have ever seen.

About one hundred meters on the river in Boca Manú we made a stop in a checkpoint called El Limonal where we received information about the park and how we should take care of our environment.

Around the facilities we found some spiders that were very big. One of them apparently had a bat for dinner the night before.

We got on our boat once again and we could see some birds and reptiles such as the spectacled caiman (Caiman crocodilus) and yellow-spotted river turtle (Podocnemis unifilis).

We were looking for monkeys on the trees when we suddenly heard one of the members of our group yelling “a jaguar!” (Panthera onca). Our guide immediately asked us to keep quiet, so we didn’t scare the impressive animal. We turned to the rainforest and we could see the largest feline in America which is also known as otorongo, a name that comes from “uturuncu” a Quechua word that means “the one that kills in a jump”. This animal was considered as a god in the Inca culture and in some pre-Incan cultures such as Chavín and Paracas. What a great experience it was to see such feline that close, I was really amazed.

After a good photoshoot, our friend, the jaguar left us, and we continued our trip on the river.

We arrive at the camp where we stayed for two nights almost at sunset. At night, after dinner, we took a stroll in the middle of the rainforest. It is an amazing feeling to walk on the rainforest´s paths with just a flashlight lighting the way, all your senses intensify. It is important to follow the group all the time and be attentive to the guide’s comments.

On our fourth day, we woke up very early with the black howler monkeys’ (Alouatta caraya) calls. After breakfast, we left on our boats towards Cocha Salvador (Salvador lagoon) We sailed on a catamaran that has a comfortable platform from where we can see the whole landscape. While on the boat we took pictures of birds such as hoatzins (Opisthocomus hoazín), green ibises (Theristicus melanopis), red capped cardinals (paroaria gularis), ringed kingfishers (Megaceryle torquata), white-throated toucans, (ramphastos tucanus), macaws (Ara), swallows, among others.

After a long wait, we could see a giant otter (Pteronura brasiliensis) family in all its splendor.

On our way to our boat, we found capuchin monkeys (Cebus) and spider monkeys (Ateles).

We went back to the camp to have lunch and in the afternoon, we visited the Casa Matsiguenka, where we found a native community that showed us their lifestyle.

At night, after dinner, we rested.

On our fifth day, we began our way back, but not before visiting a platform in the rainforest´s high lands, which allowed us to see more monkey species among the trees and the cocha Otorongo (Otorongo lagoon).

We returned to our boat and left for Boca Manú. On our way, we were still amazed by nature and besides all the birds we had already seen we also found a lineated woodpecker (dryocopus lineatus).

We arrived at Boca Manú and after taking a shower we had a toast for one of our group member’s birthday.

On our penultimate trip day, we left Boca Manú towards the first lodge. On the route we saw different heron and cormorant species, as well as turtles, once again.

After almost ten hours sailing upstream, we arrived at our lodge to have dinner and rest.

On our last day, we sailed upstream to the Atalaya port where our transport was waiting for us. On our way to Cusco, in the middle of the cloud forest we had the chance to see the Andean cock-of-the-rocks (Rupicola peruviana). We had lunch on the route with the forest’s view and harmony.

On our way, we made a stop in the Ninamarca Chullpas. The Ninamarca name is possibly a Quechua word. Nina means fire and marca means town.  These are pre-Incan tombs located over 3,000 m a. s.l. They were built with clay and seventeen 2,5 meter-high chullpas have been found in the area. We arrived at Cusco in the afternoon.

This was definitely one of the best trips of my life. I had never been so close to nature and to the animal kingdom. The city noise and routine make us forget the extremely amazing world we live in, so it is important to disconnect ourselves from our daily routine and live a few days 100% connected to nature.

Let yourself be wrapped up by the experience of travelling to one of the most important reserves in the world with us. Check out our tour to the Manú National Park clicking HERE.